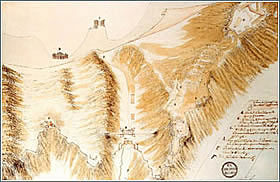 The fortifications of Ehrenberg stand at a strategically important point known as the Ehrenberger Klause ("gorge" or "narrows"). This narrow pass down to the plain around Reutte separates the Lech valley area from the region known as Zwischentoren and the Fernpass.

The first castle of Ehrenberg was built in the 13th century, before being expanded and, for a time, becoming the legal centre of the area before the court was moved to Reutte in the 16th century.

The fortifications eventually straddled the Falkenkopf and the Schlossberg and were planned to be occupied by a garrison of nearly 1000 soldiers, before being largely destroyed in the French invasion of Tyrol in the early 19th century.

Ehrenberg Castle in the Present Day

Ehrenberg Castle offers an interesting perspective on the history of the area and is nowadays run as a European Castle Museum. The buildings are being renovated by the historical association and offer many walking trails from one set of fortifications to another, as well as torchlit ascents in the evening.

A multi-media show - "Ehrenberg Historical" - also takes place twice a week from the end of March until the end of October. Tickets for the events are available from local tourist offices and certain accommodation owners.