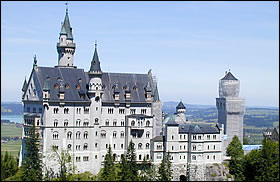 The castle of Neuschwanstein is located just over the border from the Ausserfern in the Schwangau / Füssen area. The site of the castle is a magnet for thousands of tourists from all over the world - drawn by the use of the castle in films and TV, and by the use of it as the inspiration for the Magic Kingdom castle by Disney.

Ironically, the man who built the castle, King Ludwig II of Bavaria, was obsessed by a wish to withdraw from public and into a fairy-tale world of castles and fantasy, drawing heavily on Germanic myths and legends as well as the music of Richard Wagner.

Ludwig's heavy spending on Neuschwanstein Castle, and the others that he had constructed, led the Bavarian treasury of the 19th century perilously close to bankruptcy and Ludwig died mysteriously while undergoing a psychiatric examination ordered by the government of the State.

Despite the problems of his day, Ludwig's present-day legacy is a series of tourist attractions throughout Bavaria and the myth of a sad and lonely "Fairytale Monarch".

The castle is open year-round with slightly reduced opening times in the winter months. Visitors can take the steep 30-minute walk up to the castle from the ticket centre or pay for the more relaxing "train" journey. Visits to the castle are only allowed as part of a group and individual visitors will be allocated to a tour at a certain time in their language.

There are a number of walking trails around Neuschwanstein Castle and one of the best vantage points to view the castle is from the Marienbrücke high over the Pollat gorge.

Ludwig's Imperial Castles make interesting tours by car - Linderhof Castle, for example, is only a short drive away from the Ausserfern - and the interesting Hohenschwangau Castle, where Ludwig grew up, is often ignored by the throngs climbing to the more famous Neuschwanstein.

The pretty Schwansee lies in the grounds of Hohenschwangau and again makes a nice detour on a croded summer day. Walking trails also lead from the area of the Imperial Castles to the Austrian border and the Ausserfern.